Sheltered glades are vital for many species in contrast to the windswept larger open spaces. The most well known are the butterflies and dragonflies. The annual congregation of dragonflies is impressive with several hundred coming to the central clearing (former Keepers Cottage site) to bask in the sunshine, hunt for insects and shelter while they mature before going to ponds and lakes in the area, such as Colwick Lakes, to mate and lay eggs.

Speckled Wood butterflies dance in the sun-beams of the woodland edge which they use to hold territories. We have a wide variety of woodland structure, recent and ancient, scrub to mature. There is a wide range of climates from exposed open hill tops to small sheltered valleys with marshy ground and streams. Amphibians : Smooth Newts are occasional, restricted by the lack of ponds which we are improving, with one pilot pond already dug and more larger ponds planned. Historically ponds existed at three locations but have dried up.

WEEVIL
Weevils are instantly recognisable by their elongated snouts and the grain weevil is widely accepted as the most common pest of stored grain. The female weevil bores a small hole into a grain kernel and deposits a single egg into the hole. She seals this hole with a gelatinous material and then repeats the process on kernel after kernel until she deposits 300-400 eggs. Open, round exit holes in the grain are a sign of weevil infestation. When disturbed, a weevil “plays dead” by drawing their legs close to the body. They then lie still for several minutes before resuming movement. 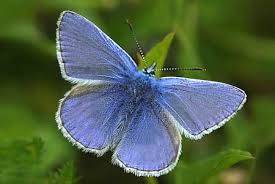 COMMON BLUE BUTTERFLY
Male upper sides are an iridescent lilac blue with a thin black border. Females are brown with a row of red spots along the edges. They usually have some blue at the base of the wings and, especially in Ireland and Scotland, are mostly blue but always have the red spots. Undersides have a greyish ground colour in the males and more brownish in the females. Both sexes have a row of red spots along the edge of the hind wings (extending onto the forewings though generally fainter, particularly in the males where they are sometimes missing altogether).

There are about a dozen black centered white spots on the hind wings, nine on the forewings. The white fringe on the outer edge of the wings is not crossed with black lines as it is in the Chalkhill and Adonis Blues, an important difference when separating these species, particularly the females.
It is Britain’s (and probably Europe’s) most common and most widespread blue, found as far north as Orkney and on most of the Outer Hebrides.

Males are often very obvious as they defend territories against rivals and search out the more reclusive females. A range of grassland habitats are used: meadows, coastal dunes, woodland clearings and also many man made habitats, anywhere where their food plants are found. 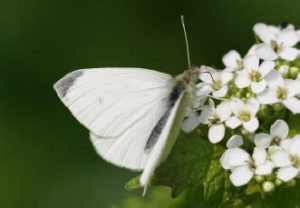 THE SMALL WHITE
The Small White, along with the Large White, can claim the title of “Cabbage White” that is the bane of allotment holders all over the British Isles although the damage caused by this species is significantly less than that of the Large White.This is one of the most widespread species found in the British Isles and can be found almost everywhere. It is relatively scarce in northern Scotland but has been seen as far north as the Orkneys and Shetlands.

This species is also known to migrate to the British Isles from the continent, sometimes flying in great swarms, augmenting the resident population in the process.It is believed that this butterfly can fly up to 100 miles in its lifetime although, undoubtedly, most butterflies will only travel a mile or two. Evidence of the mobility of this species comes from a misguided introduction in Melbourne in 1939. 3 years after its introduction, the species had reached the west coast of Australia some 1,850 miles away in only 25 generations. This species has been a pest in the continent ever since. 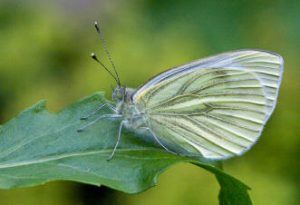 THE GREEN VEINED WHITE
This is a common butterfly of damp grassland and woodland rides and is often mistaken for its cousin, the Small White. It can be found from spring through to autumn in parks and gardens, as well as less-urban areas such as meadows and woodland rides. The first brood has lighter upperside markings than later broods, but darker underside markings.

The so-called green veins on the underside of the adults are, in fact, an illusion created by a subtle combination of yellow and black scales. First-brood adults typically emerge in late April, peaking around the middle of May and gradually tailing off through June. The second brood, which is always stronger than the first brood, starts to emerge in early July. However, in good years, the second brood may emerge in late June and give rise to a third brood. 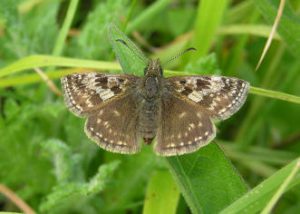 LARGE SKIPPER
This is one of the largest of our “golden” skippers and, like these other skippers, the male has a distinctive sex brand on its forewings containing specialised scent scales. This species is widespread in England and Wales, becoming scarcer further north and in southern Scotland. This species forms discrete colonies.

This species is found in sheltered areas of grassland, where grasses grow tall. Typical sites include meadows, hedgerows, roadside verges, woodland rides and woodland clearings. It can also be found in urban areas, such as parks and churchyards. 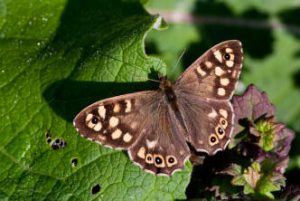 SPECKLED WOOD
The Speckled Wood is a common butterfly and familiar to many observers, especially in woodland where, as its name suggests, it is most often found. The appearance of this butterfly changes from north to south, forming a “cline”, where individuals in the north are dark brown with white spots, with those in more southerly locations being dark brown with orange spots. This has given rise to a number of named subspecies.

This species is unique among the butterflies of the British Isles in that it can overwinter in 2 stages, as both a larva and pupa. As a result, there is a mixed emergence with adult butterflies on the wing from April through to September, with a few adults being seen as early as March or as late as October, especially at southern sites. There are 2 or 3 generations, depending on location and weather conditions and adults of later generations are generally darker than those emerging earlier in the year.. 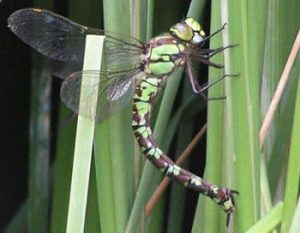 SOUTHERN HAWKER DRAGONFLY
Adults can be seen on warm, still days flying around at high speed catching insects in mid-air. Insects are caught with their strong legs and are often eaten on the wing. They detect their prey using their large eyes which allow them to see in most directions at once. Larvae are aquatic and catch their prey by ambush. They can only see a short distance but they are very sensitive to movement. On the underside of their heads they have a hinged jaw called a mask that can be flicked out to catch a passing insect or fish.

The larvae have gills and so do not need to surface for air. Larvae spend about 1-3 years underwater, emerging at night in periods of warm still weather between July and August. The larva finds the stem of a nearby plant and attaches itself with its hooked feet. The following day, the back of the larva’s thorax splits and the dragonfly begins to push itself out of the old skin. The dragonfly will then hang backwards out of its old skin with the tip of its abdomen still inside to allow its legs to harden up before it can use them. When the legs have hardened the dragonfly flips itself upright and pulls its abdomen out of the old skin. It will sit in this position for an hour or two while the abdomen fully extends and the wings become hardened. 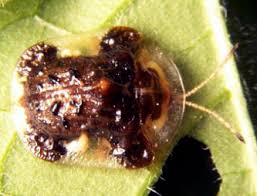 TORTOISE BEETLE
The incredible little tortoise beetle, which is from the Chrysomelidae family and the Cassidinae subfamily, is quite interesting to observe. The body of this tiny creature has an oval shape with flattened sides that give it the appearance of a miniature turtle. Tortoise beetles are herbivores, feeding on and spending their entire lives on plants such as bindweed. For those who are not familiar with the bindweed plant it is a vine type plant with arrow shaped leaves. When bindweed is blooming the flowers are either pink or white with an amazing trumpet shape to their petals. Bindweed is often found in fields that are sunny and moist, where it will quickly take over any surrounding vegetation.

Close observation of this small beetle will show that the brightly colored shell covering the wings is so all-inclusive that even the head is covered. The tortoise beetles coloration, which is considered the most brilliant of any North American beetle, will shimmer in the sunlight appearing to change as you watch. Interestingly, it is only the outer shell of the wings and upper body that are colored. In some species these beetles will even have spots or stripes on their outer shell which is why some species are often mistaken for ladybugs. 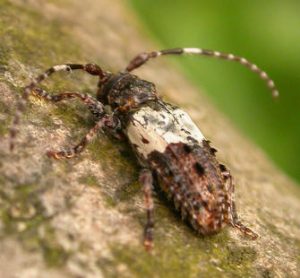 LONGHORN BEETLE
Longhorn beetles are very distinctive beetles, with long swept back antenna. They have a strong association with woodlands, plus other situations containing trees and shrubs. Many species are quite easy to identify. They are frequently found on flowers such as hogweed, hawthorn and wild roses, or walking about on dead wood or trees