Moles, short-tailed Field Voles and field mice are all food for owls, kestrels, foxes and dogs. The small mammals also affect the woodland by eating many seeds e.g. cherry stones, and invertebrates. Rabbits vary in numbers a lot depending on how much disease, predation and human hunting there is. They create an important short sward rich in plant species where they graze. Squirrels are common and eat and spread a great deal of seeds e.g. oak. Foxes have regular routes they use and make their own paths e.g. to the pond to drink at dusk. Deer may pass through sometimes but there is too much disturbance from people and dogs.

Bats are regular users of the site but have declined at the woods over the last ten years with loss of at least one major local roost site. They can be seen throughout the summer hunting around the woods. Their favourite feeding sites include a large standing rotting tree, a group of sycamore trees and an area with lots of dog droppings, all of which produce lots of insect food! The Cot Death Memorial shelter belt up from the school access road creates a well used fly away for bats moving from roosts to feeding areas across the otherwise exposed windswept hill top. Bats also fly across the site from roosts in nearby buildings to Colwick Lakes to feed. There are many holes in trees which appear suitable for bats but there has been no survey of tree roosts as yet. Small mammals are an important part of the ecology of the woods and grasslands. Foxes live on the site using holes under the roots of trees and enlarged rabbit burrows for their dens. Holes in trees are also an important feature and used by squirrels, bats and mice. 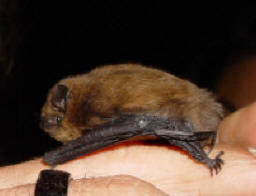 COMMON PIPISTRELLE
Pipistrellus pipistrellus
Pipistrelles are the smallest and commonest bat in the UK.
Life span – The maximum recorded age is16years. Body length: 3.5-4.5cm, Wingspan: 19-25cm, Weight: 3-8g.Physical description – Pipistrelles are the smallest European bats. They have dark red/brown fur on their backs and yellow/brown undersides. The ears, nose and wing membranes are black/brown. Distribution – Common pipistrelles are distributed over most of Europe, including the whole of the UK, minus a few remote offshore islands.Habitat – They occupy a variety of habitats, including open woodland, parks, marshes, farmland and urban areas. 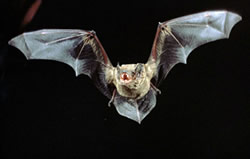 NOCTULE BAT
Nyctalus noctula
Along with serotine bats, noctules are one of the largest British species, and are one of the first to emerge in the evening.Life span – Maximum recorded age of 12 years. Statistics – Body length: 6-8.2cm, Wingspan: 32-45cm, Weight: 19-40g. Physical description – Noctules are one of Britain’s largest bats. They have short, golden-brown fur, with a slightly lighter underside. The ears, nose and wing membranes are dark brown and the fur extends on to the wing membrane. The ears are short and stout. Distribution – They range over most of Europe, except for Ireland and the far north. They are also virtually absent from Spain, Portugal and the south of France. 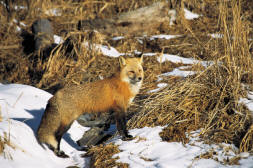 FOX
True foxes fall within the genus vulpes, and are therefore distinct from other species of canids also referred to as foxes. They are opportunistic feeders, eating what ever they can from small mammals and birds to carrion and fruit. Species of fox can be found on every continent except Antarctica, occupying habitats from the mountainous to the sandy. They range from the large and very successful red fox to the small Rüppell’s fox. Quite often the tip of the tail is a different colour from the rest of the pelt. 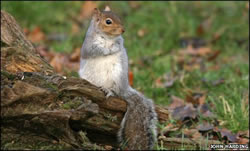 GREY SQUIRREL
Around 160,000 red squirrels remain in the UK, compared to 2.5 million grey squirrels
Over 2 million of these grey squirrels live in England In the past, grey squirrels have been blamed for significant declines in now rare birds such as lesser spotted woodpeckers, common nightingales, tree pipits, willow warblers, song thrushes, willow and marsh tits and hawfinches 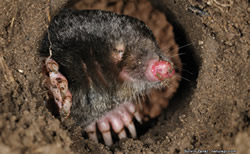 MOLE
A mole’s diet primarily consists of earthworms and other small invertebrates found in the soil. The mole may also occasionally catch small mice at the entrance to its burrow. Because their saliva contains a toxin that can paralyze earthworms, moles are able to store their still living prey for later consumption. They construct special underground “larders” for just this purpose; researchers have discovered such larders with over a thousand earthworms in them. Before eating earthworms, moles pull them between their squeezed paws to force the collected earth and dirt out of the worm’s gut. 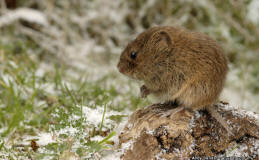 FIELD VOLE
Field voles range across Europe and east into Asia. They are present on the UK mainland, but absent in Ireland and some islands. As they travel, field voles leave a trail of scent to warn off other voles. Hunting birds of prey, such as kestrels, look out for the UV light that radiates from the trails 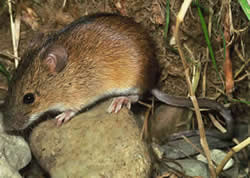 WOOD MOUSE
The Wood Mouse will live just about anywhere there is food and shelter. It traditionally roams fields, hedgerows, forests and grass lands where it can find plenty of food. They are omnivorous and will eat a range of seeds, berries, invertebrates, worms, carrion and other similar food. It tends to have a short life in the wild as so many different creatures prey on them, with an average age between 6 and 12 months, although they live longer in captivity and when conditions are favourable. They can reproduce quite frequently with the gestation period around 25 days. They give birth to between 4 and 7 mice which are soon out on their own after 4 weeks or so. This short parenthood period means that wood mice can reproduce several times per year. They nest wherever there is cover and warmth, this usually means below ground but they can also be found in hedgerows, buildings, car radiators and other similar dwellings. 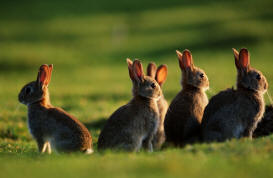 RABBIT
Rabbits are herbivores who feed by grazing on grass, forbs, and leafy weeds.
Rabbits graze heavily and rapidly for roughly the first half hour of a grazing period (usually in the late afternoon), followed by about half an hour of more selective feeding. In this time, the rabbit will also excrete many hard fecal pellets, being waste pellets that will not be reingested. If the environment is relatively non-threatening, the rabbit will remain outdoors for many hours, grazing at intervals. While out of the burrow, the rabbit will occasionally reingest its soft, partially digested pellets; this is rarely observed, since the pellets are reingested as they are produced. Reingestion is most common within the burrow between 8 o’clock in the morning and 5 o’clock in the evening, being carried out intermittently within that period.